I asked Gerald - http://figalfoto.com/index.html - for a  contribution when I saw his pictures taken with a large format camera and a 150 years old lens. Isn't that really frugal? He immediately agreed and here I proudly present his contribution. Thank you very much, Gerald.

Click on the images as usual for a bigger size.

Please find attached as requested two Caffenol-C-L developed photos, the one you liked and the companion shot of the skyline. I thought the pair had good tonal range with the Caffenol. These are the straight scan black-and-white versions. 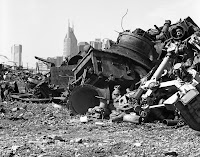 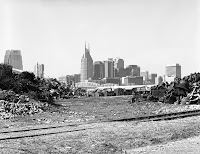 Tech details:
Both shots were done in the mid-morning facing west with a 4x5 Speed Graphic mounted with a E.&H.T. Anthony & Co. Single Achromatic No. 2 barrel lens (a landscape meniscus) that probably dates from 1860-70s. Skyline shot was at f-22, shutter 1/50; the scrap heap shot was at f-18, shutter 1/50.
Film was Arista Ultra 100 (= rebranded Fomapan 100). 5 minutes preasoak, developed for 70 minutes with Caffenol-C-L in Nikor daylight tank., agitated initially for 45 seconds (= 12 inversions), then let stand for entire remaining time. Water stop, Ilford Rapid Fix.
Scanned negative straight as is on Epson Perfection V700. No post processing on these version (except to crop scan and remove a little dust from scan).
Coffee used was Folger's Classic; Arm & Hammer Washing Soda, powdered Ascorbic Acid, and KBr from Photographer's Formulary. Followed Caffenol-C-L recipe but used 1.5g KBr in 1000ml water.
Vita:
Day job is as university professor (Modern Japanese history and culture) at Vanderbilt University. I've authored Civilization and Monsters: Spirits of Modernity in Meiji Japan (1999) and several articles.
After many years of digital photography as a hobby and work tool, I began film photography about 18 months ago in the fall of 2009 with my deceased father's medium format Brownie Hawkeye Flash and with homemade pinhole cameras (paper negatives and medium format film). At the same time, I taught myself black-and-white film processing and began collecting old cameras of various formats, 35mm to 4x5. After obtaining a 1949 Speed Graphic, I started to acquire vintage lenses for it, conventional and non-conventional ones to experiment with. Lately I am shooting majority LF 4x5 black-and-white alongside medium and large format pinholes. Occasionally I take out my Yashica Mat 125G TLR (which I love), and for "snapshots" I tend to use a 35mm Pentax MG and Pentax Super ME. My "special occasion" camera is a 1926 Kodak Autographic 3A that I modified to take 6x14cm panoramic photos with 120 film.
My aesthetic tendencies are sympathetic to the Pictorialists, but I also appreciate good straight photography. I try to do both.
I love Rodinal, but lately it is getting jealous of my affair with Caffenol-C-L. Like many Caffenolholics, I like the idea of mixing a developer from common substances that are eco-friendly. I also like that it is very inexpensive, but that would not matter if it didn't produce good results. I have had such consistently good batches of 70-minute stand developed Caffenol-C-L -- no fogging, no uneven development, and great tonal range -- that even if all developers disappeared from the world I would be happy to use only Caffenol (okay, I would miss my beloved Rodinal).
Thanks again, Reinhold, for researching these recipes!
Cheers,
Gerald Figal
-----------------------------
Finally a beautiful portrait taken with a 240mm Voigtländer Heliar at f-5.6 on the Speed Graphic., developed in Caffenol-C-L as above. Extremely fine tones and note the clever diagonal line of sharpness only possible with the sophisticated settings of such a professional large format camera. Impressive work! Thank you very much, Gerald.
Best - Reinhold 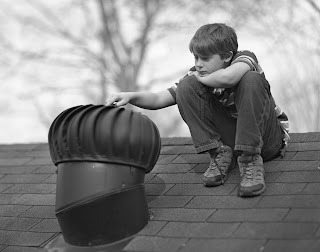 This is absolutely stunning!

Just an addition and correction -- I failed to mention that I did a 5-minute pre-soak in tap water. Also, the Heliar is 240mm, not 210mm -- my mistake.
Cheers,
Gerald

Post updated with the corrections, thank you Gerald and Taylor.