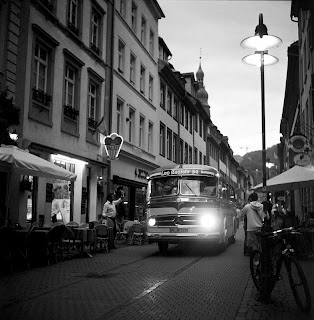 Reinhold asked me to write about my experiences with Caffenol-C-L and Shanghai GP3. I´ve used caffenol-C-M with different films and found it useful. Caffenol-C-L seemed to be promising, so I tried it the first time with a Shanghai GP3 that was pushed 2 steps from the normal 100 to 400 ASA.

Data for the first try: presoaked for 6 minutes (I was busy...), 60 minutes standing development with gentle agitation in the first minute and three turns after 30 minutes. I used 1.5 gram/litre potassium bromide  in the mixture. The result with the pushed GP3 is very pleasing for the first attempt. As you can see in the pictures, the GP3 took the treatment very good. I took the pictures with my trusty Seagull 4A (Rolleiflex clone), not the first choice for a quick shot. When the old bus appeared, I simply estimated time and aperture and hoped the best. Must be 1/8 second with aparture around 5.6, if my old mind serves me right. You can take these long times with a TLR hanging on a neckstrap and a little luck.

The Shanghai GP3 100 ist the cheapest medium format film available at the moment. You pay around 18 Euro for 10 rolls on ebay. Please do not mix it up with the Lucky films, this is a different story. The GP3 has a reasonable fine grain, a good tonality and, as you can see, could be used not only at 100 ASA. It is not a perfect film. Being an old type emulsion, you should use hardener and should avoid toching the emulsion when wet. It is prone to failure when stored to hot or in a humid environment. If this happens to you, its possible to read the numbers from the backing paper on your pictures. And of course the small tape at the end of the film has no gum on it...

Rollei Universal 200 - the first film to fail in Caffenol

"Reinhold asked me to write about my experiences about Caffenol and Rollei Universal200 in Caffenol and I would like to thank him for the inviation. Thank you Reinhold for this Blog and for sharing your Caffenol Experience !
The first time i heard about Caffenol was in March 2010 when Reinhold started his Blog. At first I thought this would be a nice experiment and very cool to mix up your own developer by ingredients that can be found in most of out households. So I started my first trials with Fuji Acros 100 and Caffenol C-M. The results were pretty good and I decided to give the Rollei Universal200 a try, a film with beautiful fine grain and impressing sharpness.
That said and done I first tried the Caffenol C-H recipe, which ended up in very dense and foggy negatives with almost no picture to be seen on the film. I tried several shorter times, but the negatives stayed very dense and kept foggy. So the time had come to ask Reinhold for help and I sent him a few rolls for his own trials. Sadly that Reinhold has stated, that the Universal200 refuses to get developed in Caffenol. Though you can get a picture with a good scanner like the Nikon 9000 ED being able to read also high densities, these negatives won't be useful for printing in your darkroom.
Regards
Ralf"
Thank you very much, Ralf for your investigations and sending me the test rolls. Negs are really quite unusable, no matter what I tried with Caffenol-C-L. I increased the bromide and decreased developing time, always with the same results as Ralf describes above. Either the fog is low, but then the image is almost invisible, or you have negs of usable density, then a huge base fog covers every detail and destoys contrast, see the sample below. You can get viewable scans with some effort, but it's no fun at all. I was uncredibly surprized because the RR 80s was a decent film in Caffenol-C-L. Not easy to handle, but with some very nice results. First I thought that the production was faulty. I made a development of the Universal 200  at EI  200 ASA in Rodinal to verify this. I was even more surprized that the Rodinal development was without any fault. Perfect clear, sharp, with a pronounced Rodinal-type grain.
All the aerial films by Agfa are way of "divaesc". 120 film should be loaded/unloaded in almost complete darkness, because the light is guided by the polyester film base. Really bad for shooting abroad. Exposure latitude is low, sharpness and contrast high. Speed loss of at least 1-2 stops in the shadows because of the low blue sensitivity makes things really complicated. What a recreation after testing it was to go back to "traditional" films like Tmax, Acros or APX.
With a lot of postprocessing I could get these 2 Caffenol-C-L developed images, the negs look horrible.