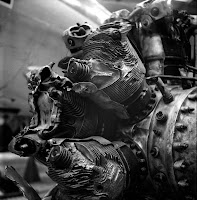 Hello everybody, Reinhold invited me to write something about my latest Caffenol results.

The first picture (engine of an shot down WW2 plane) was taken with my Seagull 4A TLR on Ilford HP5+ film. In fact it is labeled as Adox CHM400. I gave it a try at 1600 ASA developing it 70 min at 20° in Caffenol-C-L using 1 - 1.3 gram per liter potassium bromide. I call it a "semi stand" development, agitating every 10 - 15 minutes. I was very pleased with the result and the amazing fine grain. Second picture (a set of gauges in an old submarine) was shot on 35mm HP5+. Bevor insolvency Ilford sold lage amounts of master rolls to other companies, so this film is labeled as OrwoPan 400. The film is rather old, being expired in 1996. Like the MF version it was exposed at I.E.1600. I was really amazed about the nice grain at this speed and format. In other developers, I´ve got more grain at box speed.

OK, Caffenol-C-L is very useful using expired high speed films, I thought. Let´s try something special. By chance, I´ve got some rolls of long expired (1997) Kodak T-MAX 3200 years ago. Never got any usable reults with this films, too old. So I grabbed one of the films, threw it into my Pentax Spotmatic and exposed it at I.E.1600. Surprise, the whole film was usable! Here is one of the results. As you can see, the grain is very pronounced.

Both 35mm shots were developed 70 minutes as described above. Click on the pictures for a bigger size.