it's good to have friends and besides my regular life I found some friends in the www, some of them supporting me with my blog. Here we have two contributions concerning the Ilford Polypan F film. It's a cine film with almost the same emulsion as the regular Pan F, so boxspeed is 50 ASA, but missing a good halo protection and its available awesome cheap as 35 mm bulkware. Both, Wolf and Mike, exposed the Polypan F with EI 100, Wolf (Lupo914 @ flickr) developed the film in Caffenol-C-L, Mike (Mikeinlagardette @ flickr) in his own Caffenol-C variant that is quite similar to Caffenol-C-M. So let's see their results:

time for a new Caffenol experiment. For those „nickel nursers“ out there, it must be an incredible bargain, 90m 35mm film for 22 Euro resulting in 44cent per 36er roll of film. I´m speaking of the Polypan F, rated 50ASA, rumored to be a kinefilm made by Ilford. In fact its a very thin, polyester based film with less than optimal anti halo protection. But it has its own kind of old fashioned look.

For me, I´m using it for quite a while, exposing my second 90m roll of the film. In the past, development was done with Rollei RLS or Rodinal with decent results but only at 25 – 50 ASA, making it a film for sunny days only. Using Caffenol-C-L with Shanghai GP3 100, resulting in very good images rated at 400 ASA, I was curious trying Polypan F in the same soup. For the first attempt I´ve loaded a roll of Polypan F in my Pentax MZ-5n and exposed it like 100 ASA. Development 5 mins presoak, 60 minutes at 20°C in Caffenol-C-L,  continuos agitation for the first minute, two gentle agitations at 15, 30 and 45 minutes. The results are very promising.

Below are Mikes results, portraying a Komaflex S for 127 film (4x4 cm) with a Minolta Dynax 600si and a 35-70mm Minolta zoom lens, cropped to square size: 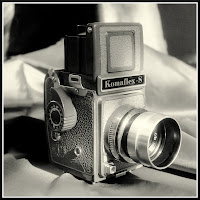 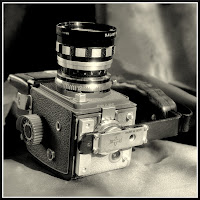 Again, the Caffenol-C-L images seem to be a bit more on the finer grained side, the Caffenol-C produces some more "grainy character" and the slightly glowing highlights are fitting beautifully to the subject imho. Not to bad for a less than 50 euro-cents/roll film. Well done guys. Thank you very much.
Wolf @ flickr, Mike @ flickr
Best regards - Reinhold